When you’ve been in the video business for almost 40 years, you produce a huge amount of work. Although some of the work is dated by standard definition instead of today’s super hi-def 4k, 8k and yes… even 12k is out there, the body of the work is still good.

In this vault, we have placed work that we’re still proud that we produced. Yes, some of it may seem dated. But at the time, it was the current feel and techniques we were using to communicate the message. Remember, there was no internet for most of this and so VHS was the standard to get these messages out to potential customers.

This video was done around 1988.  The agency came up with the idea of an old ‘gum shoe’ detective trying to solve a mystery.  At the time, cables connecting computers and phones were a problem in offices.  WIFI didn’t exist yet.  This was a blast shooing.  Using hard-lighting techniques, we shot in an old state government office in Harrisburg, PA.   It’s thick with ‘schtick’, but got the idea across that cables needed to be controlled in an office environment.

In the mid to late 1990’s, banks were going through consolidation.  Larger banks were buying smaller ones….then in turn, those banks were being purchased by MUCH larger financial institutions.

To prove to customers that BBNB was going to always be there…(HAHAH, 2 years after this spot they sold out), we produced this spoof.  A bank customer goes into the bank…and within 30 seconds, the bank changes names several times.

There’s nothing like having a few good actors.   AND a Steadicam.   This spot was shot in the old post office in downtown Lancaster around 2002.  For a ‘one-shot’ spot, we only did about 6 takes.  It took over 2 hours for the lighting and choreography, but once that was all done…the shot went smoothly.

Here’s a behind-the-scenes shot from the shoot ! 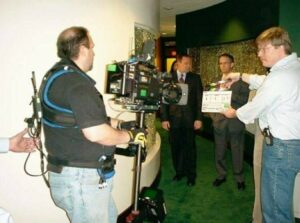 In 2003, baseball came back to Lancaster, PA.  The opening ceremonies were epic that evening.  But to set everything up…we produced this video.  The girl was actually 13 years old at the time and was in a play on Broadway.  The other kids were local ‘friends and family’.  Conceived to show many familiar locations in Lancaster, the video ends up with the kids arriving at the stadium on opening night….

1996.  Digital non-linear editing was just beginning.  Avid was one of the systems and there were a few more.  Our choice at the time was the Scitex Microsphere.  With a total hard drive capacity of 36 gigabytes…we were able to do some amazing stuff for the time.   As a simple promotion idea, I got a bunch of television production students at Kutztown to help us make this video.  The head of the theatre department played the ‘professor’.  WOW.   We jabbed at the Apple Macintosh which ran the ‘sphere’ editing system.   The best part was this video won a nationally Telly award for promotional video.  This is also where we used our term “Transconfarculated”.  Created by Kevin Martorana and Steve Nosoff, the term mean anything that is taken and turned into something else through a physical or digital process.

In 2017 our friends at Woodstream Corporation asked us to produce a video on this new plant liner they were manufacturing.  Normally, planting takes place in the spring and summer.  But the challenge here was it was early fall.  So we had to pick locations that looked like summer.  After we were done shooting and showed the client the first cut, they asked if we could get rid of the leaves that were on the grass in the background of where the talent (the lovely Tracy Toth) was standing.

We asked about this during the shoot and they were ok with the leaves.  Well, as you know, things change.  So…with a little help from one of our graphic artists, the leaves got the ‘boot’ !

Around 2003 I met Ben Witter.  An amazing trick-shot golfer.  He had some investors who thought his teaching style would sell DVD’s on the Golf Channel.  So we produced a 15 minute infomercial that then looped to make a 1/2 hour show.

Shot in St. George, Utah during the winter, we had people watch the videos, then try the exercises on the course – so they could honestly testify that it worked.

Sad part is…no one knew who Ben was.  Even though Ben had out-driven John Daly for his golf bag and clubs…he wasn’t a household name.

The DVD’s did ok…but didn’t make the money the investors thought it would.  But…it was a fun project to work on and we got great video !

In 2004 we were asked by Stainmaster to create a simple…testimonial spot that the carpet dealers could use around the country to promote the brand.

This spot was shot in Atlanta, home of Stainmaster.  All the people on-camera are actors.  The second half of the spot would then get a voice-over for the local dealer and room for them to put graphics for carpet specials.

But to promote it…you would think we’d have SOME access to the Eagles, clothing, referee, or even the stadium.  NO.  That’s right.  NO.

So…We had to get look-alike green football jerseys and shoes.  If you look closely, you can’t get a real NFL referee jersey.  That’s a soccer jersey with an embroidered R on it.  The lines on the real NFL jersey are wider and less frequent.

We shot at an indoor AFL stadium in Wilkes-Barre.  Also, notice we don’t see above the waist of anyone…they’re all extras and you can’t use ANYTHING with the Eagles on it.  Even the stadium…is stock footage of a soccer stadium in England.  We used After Effects to do the ‘card flip’ trick.

It’s not often you get a call from the client that goes, “Hey…we need an amazing video for our show in Vegas.  I don’t care what it costs…but I need it ready to go in 4 weeks.”

Yeah…so in 2002 we whipped up this ‘little’ video for JLG that played on a large 20×20 jumbotron on the booth in Vegas.  The 3D and graphics work done at this time were state-of-the-art !

Everytime the video played on the jumbotron…the entire booth filled with people !

This training video (just a portion of it) was produced around 1998.  When a company is training people on manufacturing procedures, it helps if that training is not boring.  This video did just that.  Using a bit of the character Inspector Clouseau from the famous Pink Panther movies…Inspector Gasket searches for mistakes and what to look for in the manufacturing of gaskets.  Our voice over talent was a dead ringer for Peter Sellers voice in those movies !

Clipper Magazine – The Everything Book

Oh my.  Around 2001 Clipper Magazine decided to produce a tv commercial with a jingle.  That jingle is still catchy today !  The singer and his background singers were shot at the American Music Theater in Lancaster.  Primordial After Effects were used with the ‘readers’.  Some of them were famous business people.  If you play this more than once, you won’t get the jingle out of your head !

In 2003 JLG came out with a new portable, towable lift.  The TowPro was an easy way for contractors to reach high places, economically.  Unfortunately JLG decided they needed a video for this new product ‘right now’.  Which was early December.  Not an ideal time to shoot outside in Pennsylvania.  So off to Atlanta we went.  Except, it was 30º, the coldest Atlanta had seen in decades.  But we got through it and produced this great infomercial style video that showed all the capabilities of the TowPro.  PLUS…so pretty cool cutting edge 3-D animation.