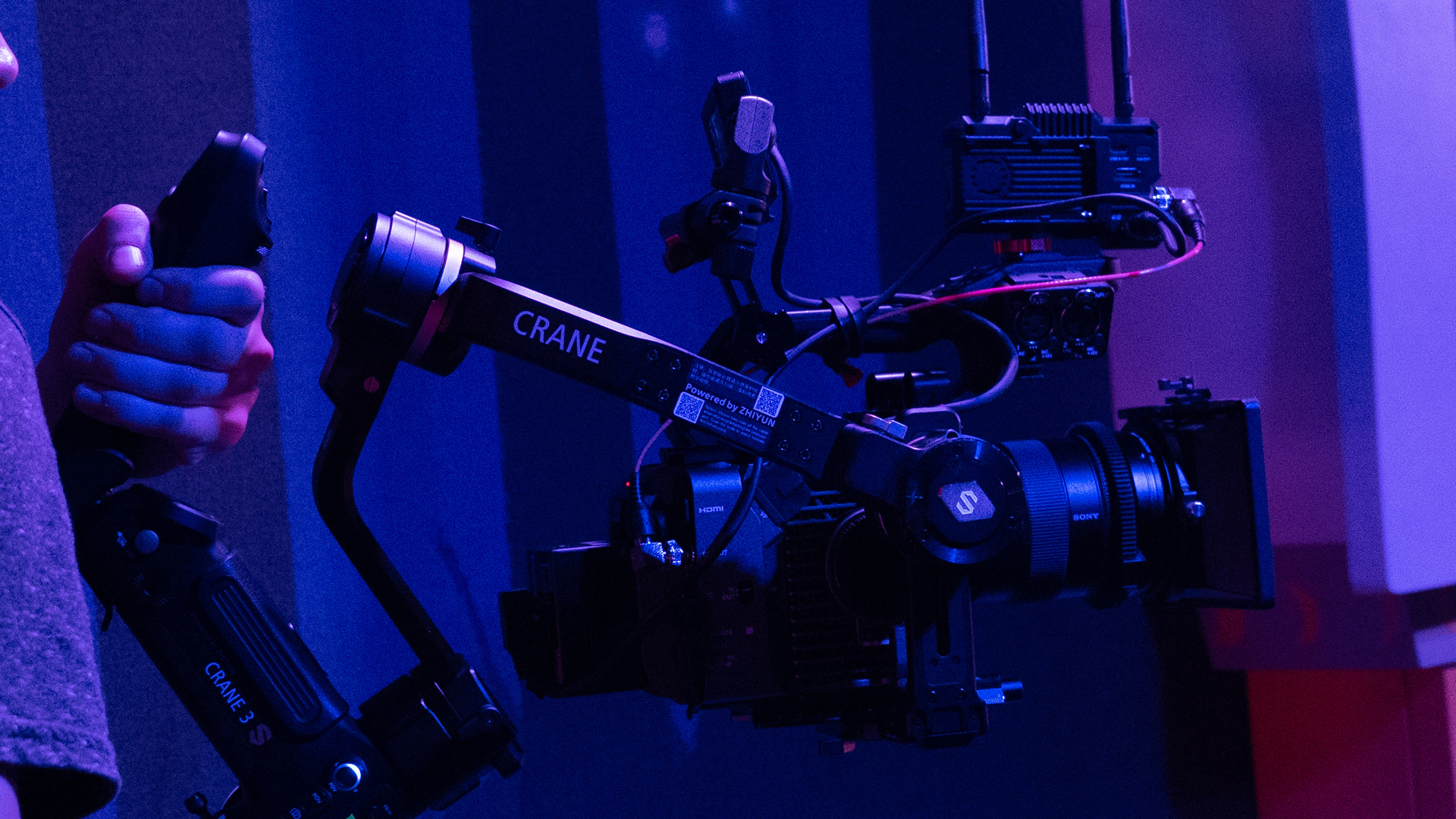 Our History with Gimbal Technology 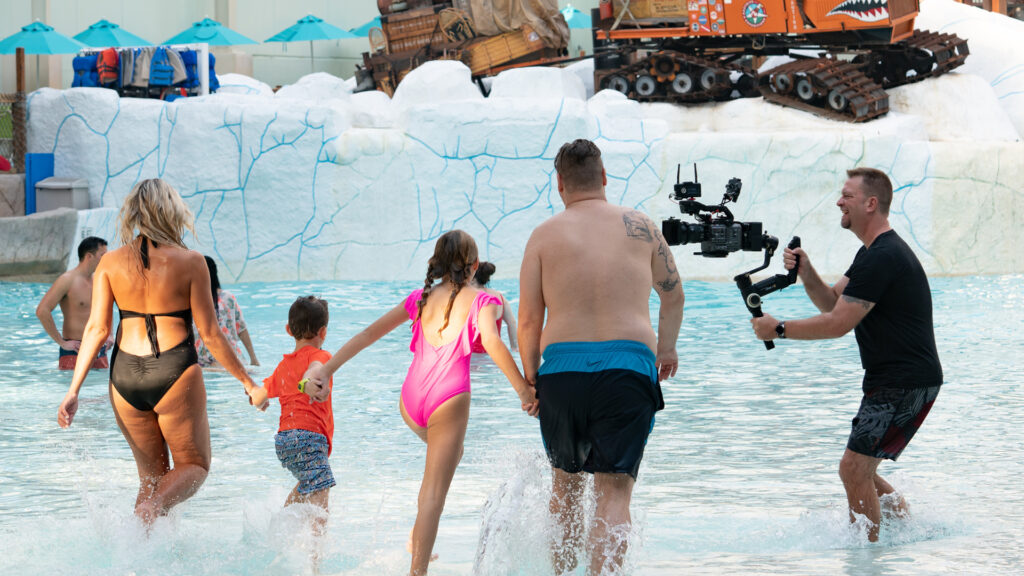 You have no doubt seen at least one video on YouTube/TikTok/Instagram where a person is walking in a location and talking to you, their devoted followers, where the camera stays perfectly focused on the subject while maintaining a relatively smooth point of view. Then in an instant the personality rotates the camera so you can see exactly what they’re seeing from their point of view. Again, the camera stays in focus and even though it is moving through a venue, the motion stays relatively stable. Selfie culture in moving pictures.

It seems like everyone is doing it, there are millions of videos on social media platforms with content that is created by a person showing their audience their life. It’s so common these days it is truly no big deal.

Except here’s the thing, it is a big deal, huge even.

There was a time not even 15 years ago, where in order to create relatively stable video or film content with subject’s point of view, It required a near full body rig. With a large 3 axis gimbal, attached to the operator with a mechanical arm. The gimbals need to be “nulled”  at the start of the shoot day by an operator who specializes in operating not only the rig but can also operate a high-end video or film camera. Think of nulling the gimbals as creating neutral buoyancy, when left alone the camera head is level and stable on all three axis.

The beginning of Steadicam in the 1970s

I’m talking of course about the Steadicam. Invented by Garrett Brown, The legend is better than the real story, Sly Stallone, Rocky! Running up the stairs at the Art Museum! That’s Steadicam Baby!   (actually the first film was Woody Guthrie bio-pic Bound for Glory,1976). Steadicam really gained fame and acclaim outside the production industry for the under cranked forest shots in the 3rd Star Wars movie Return of the Jedi. That was 1983. For the next 15 to 20 years the ability to create smooth motion camera moves without building dolly track or wheeling in a jib arm was limited to high end movie production or, in some cases, large scale sporting events. The Steadicam evolved over time from a true Frankenstein’s monster rig into a streamlined almost elegant vest and gimbal solution.

In the 2000s the Technology Becomes Democratized

Then after 2007 and the introduction of the iPhone, cell phones, but more specifically cell phone cameras happened. It took a couple of years to get the technology worked out, but the day came when the first GoPro camera was introduced and the X-Games sports world rejoiced! “Now we can make the RADDEST videos ever, Ourselves!!”  The professional production world? We scrambled to acquire all the suction cup doo-dads and vest-a-ma-hickeys we could so we could mount and place the high definition enabled camera in places imagined only by animators.

People put GoPros any darn place, this is one of the cooler mounts I’ve seen though, Jim Root RULES!

Everything was, and still is, getting smaller the cameras, the camera lenses, and the gimbals. The once mechanically free-swinging gimbal system was replaced by miniature motors, software and the “accelerometer” . DJI is now a leader in the gimbal technology space. They began by attaching a gimbal with a mount for a GoPro to a quad-copter drone which democratized aerial video production.

DJI then applied their gimbal expertise and burgeoning camera technology and came up with the first-generation OSMO a handheld camera gimbal system that used a smart phone for a monitor. The camera’s recording capability was High Definition, the audio would need to be recorded separately and with a digital slate if the OSMO was to be used to capture “A” camera footage. There were limitations with miniaturized everything, and this was what kept the early OSMO from becoming more of standard production tool.

An Industry Arises, Overnight (well it seemed like that)

Many other manufacturers were pursuing the mini gimbal technology -many variations began to pop-up. Free-Fly with it’s Movi gimbal system began to inhabit the indie film space. It was larger and provided the ability to “fly” a stripped-down, full-sized cinema camera. The camera operator needed some real upper body strength if a shot was to be more than 30 seconds. They were priced in the range where owner operators would really need to use it all the time to see the return on their investment. These early professional mini gimbals used various power sources. In the case of the Movi it was lithium polymer (LiPo) batteries (used to fly model hobby aircraft) These batteries have high output but have been known to be notoriously unstable. Plug a lead into the wrong socket and you could literally blow yourself up or turn the gimbal system into carbon fibre object d’art or both if you’re unlucky. This happened to us one time, it hurt, smelled bad and was expensive. Also, these batteries can also explode while charging if they feel like it, so you know, let’s add some actual grenades to the equipment room, danger is our middle name.

DSLR and the Gimbal

Canon with the 7-D, Sony with the a7 began to become serious alternatives to full sized camcorders in the early 2010s. The chip sets and lenses with auto-focus features allowed them to become “B” cameras on many shoots. Some companies used them as their “A” rigs. Tilta and DJI saw this and adapted their early stand-alone gimbal systems so they could handle the weight of a DSLR with an auto-focus lens. The handheld gimbal has become a must have B-unit camera system. Fantastic for capturing b-roll of fast action events or simply putting the viewer in the mix because of its lack of a footprint and portability.  High-end images were attainable using the gimbal tech and DSLR.

At Take One Productions we have been early adopters of new technology for a long time, gimbal tech is no exception. 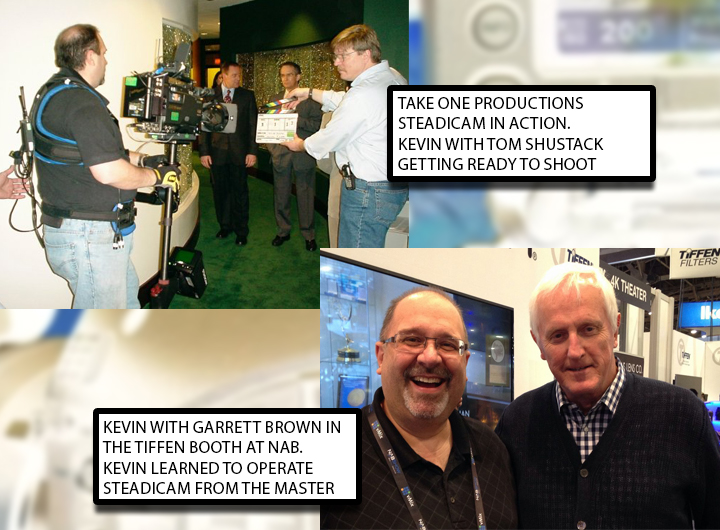 Well, he’s not 700 years old or green but the man on the right is THE Steadicam Jedi Master. Kevin learned to operate from “the source”.

Kevin is a member of the Steadicam operator’s association and took operating classes from the Garrett Brown. Take One has owned several DJI quad copter cameras as well as the first generation DJI OSMO. 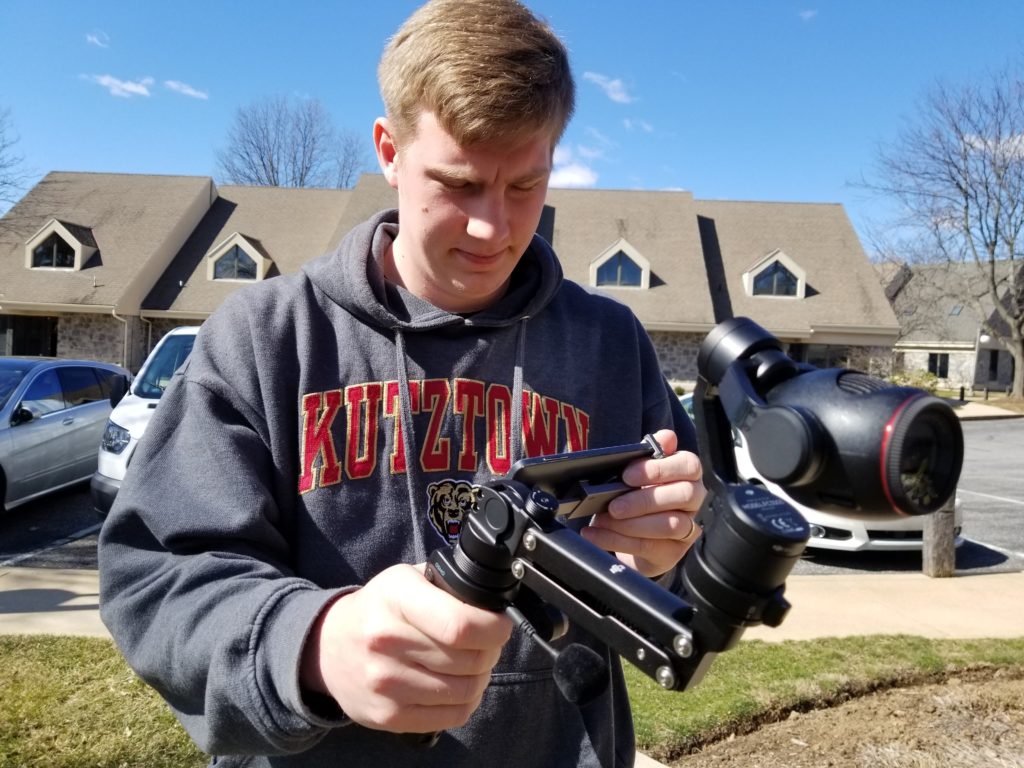 We have been wanting to incorporate more mobile camera work into our productions and knew there would be a gimbal solution for us. We recently took possession of the Sony IMLE FX-6 which is a mighty mite production camera, small enough to * squints * maybe be flown on a gimbal. 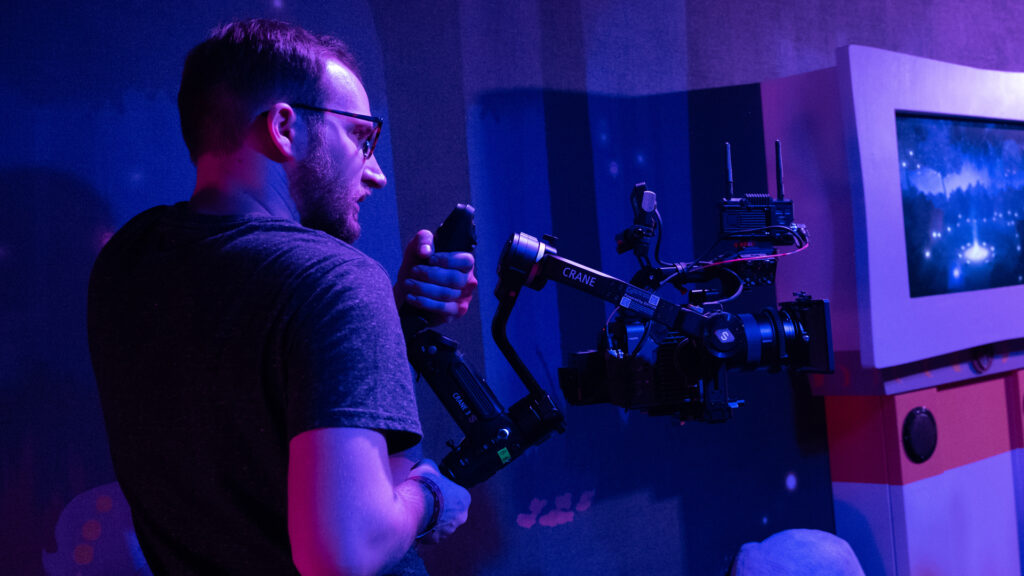 With the right gimbal we can have more dynamic on-camera and b roll shots. The 2020’s auto focus technology allows for the operator to focus frame composition feeling confident the subjects will remain in focus. So, which gimbal to choose?

We landed on the Zhiyun-tech Crane s-3 after much research. The Crane is a well-engineered and crafted heavy-duty gimbal. It has an app for remote operation and monitoring, an ergonomically designed joystick and focus wheel. It comes with 8 preset operation modes, including a cool Vortex mode which means we’re finally ready to work with Christopher Nolan. 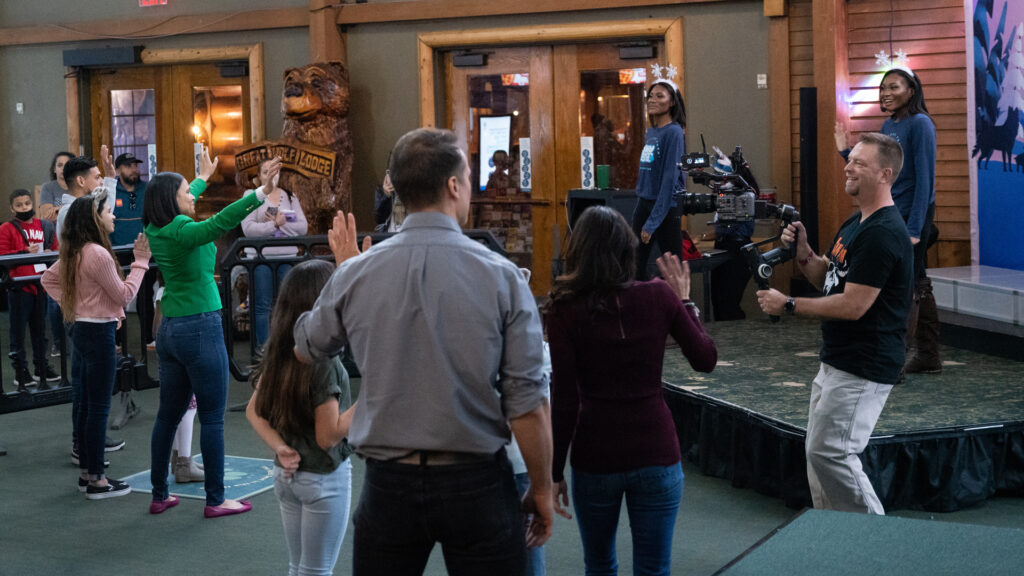 The dance party’s moves never looked smoother, being able to move in and around the guests made these shots look like a lot of fun

Our operators will need to keep their fitness levels up to operate when flying the FX-6, it is heavy.  The ability to incorporate wireless video from and audio to the FX-6 adds to the weight. The result though is quality video files with the audio incorporated into the file and real-time in the field monitoring capabilities for those times with the technology isn’t perfect.

The images we’ve been able to capture with the system have been fantastic. They are what we, and we know every viewer expects to see in the age of the selfie video.

Until the next time, be excellent to each other.